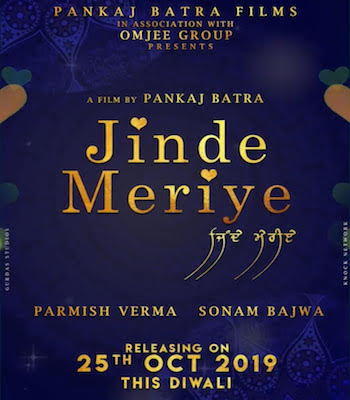 Most of us are already aware Parmish Verma and Sonam Bajwa are casting in the Punjabi movie ‘Singham.’ However it has been announced they will be sharing the screen together yet again for another movie entitled ‘Jinde Meriye.’

Sonam Bajwa has worked with many artists and released blockbuster films whether thats with Ammy Virk, Diljit Dosanjh or Gippy Grewal.

And Parmish Verma who is well known as a video director has recently been signing up to more and more Punjabi films.

Firstly with the release of his hit debut movie in 2017 ‘Rocky Mental’ to releasing his next movie ‘Dil Diyan Gallan’ in May, currently shooting for ‘Singham’ and now announcing another upcoming film ‘Jinde Meriye!’

The film will be releasing this Diwali on 25th October 2019 which has been produced by Pankaj Batra Films and Omjee Group.

Very Happy to Share the announcement of Our next Movie #JindeMeriye along with Sonam Bajwa. Releasing on #Diwali this Year #25th October 2019. Directed by PankajBatra Bhaji. Produced by PankajBatraFilms and OmjeeGroup