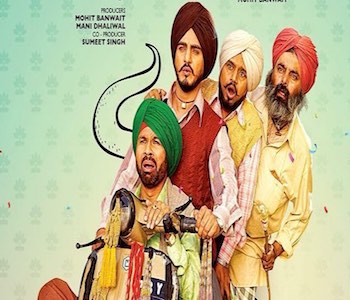 Parahuna is Kulwinder Billa's second movie as an actor. His first film being Television alongside Mandy Takhar. The film stars Kulwinder Billa and Wamiqa Gabbi. Set in the era of early 90's the movie is a complete family entertainer packed with the punch of comedy.

The film is set in Punjab which focuses on Kulwinder Billa’s parents trying to get him married off. However we see Kulwinder obsessed to say the least with the iconic Punjabi actress Preeti Saproo.

Fast forward we learn he’s not ready to get married as he wants Preeti Saproo. He then meets Wamiqa who resembles his dream girl. Through their bickering as we all may have guessed now they fall in love. But it isn’t so easy them getting married as Kulwinder goes through some obstacles to ensure Waqimas brothers wedding is not called off.

The music in the film really keeps you on your toes, my personal favourite is Saat Bande sung by Rajvir Jawanda but Kulwinder lip syncing the song didn’t give the song the strong macho justice as I always associate Billa with softer beats.