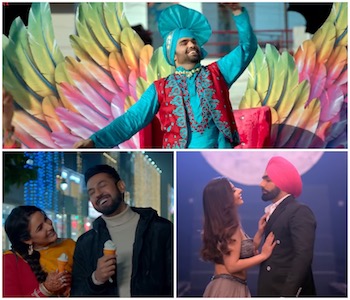 Every month we look back at the Punjabi movies releasing in the past month so here are some of our #PunjabiMovies of October!

In October the film Honeymoon was released which starred Gippy Grewal and is Jasmin Bhasin debut film. The film was shot in the UK and India and has done extremely well since its release filled with humour, romance and laughter.

Earlier this year Ammy Virk and Tania worked together for the film Bajre Da Sitta which focused on how life used to be back in the days in India. And now they are all set to release Oye Makhna.

After watching the trailer, it gives us a hint that Ammy Virk loves a girl however the two families have never got on with each other. Also, another confusion crops up. So how does this confusion/problem get resolved? Only one way to find out and that is by watching the film which will be releasing on 4th November 2022.

Not only did Jasmin Bhasin make her debut another actress made her debut in the Punjabi film industry and her name is Jannat Zubair. Kulche Chole starring Jannat Zubair and Dilraj Grewal will be releasing on 11th November 2022.

Jannat is an artist that loves to take challenges and was a very song contestant in Khatron Ke Khiladi (Indian version of Fear Factor). For her debut film she had to learn Punjabi and she took this as a challenge. Check out the trailer.