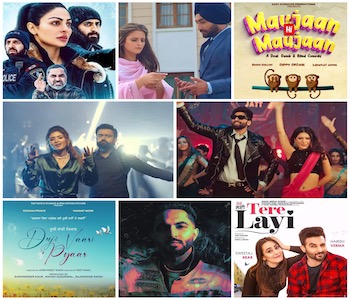 Every month we look back at the songs released in the past month so here are some of our top #Songs of November!

Tegi Pannu to date has just grown in the industry and has had success after success. Recently he released his album ‘Disturbing The Peace’ which has been composed by Manni Sandhu. And we all know when Manni has composed a track it is definitely to watch out for because he doesn’t fail to disappoint his fans! Each track illustrates a story of its own. Would certainly recommend to check out the album.

Shipra Goyal releases the track ’10 Outta 10’ featuring Amrit Mann. A catchy beat by DJ Flow. The lyrics have been penned by Amrit Maan which illustrates where they are both saying they are perfect and there style is on point and that they are perfect for each other.


Shivjot released a dancefloor track which sounds a bit different to his previous tracks entitled ‘Kamle Jatt.’ The music has been composed by The Boss. One for the DJ’s to add to their playlist.


Ranjit Bawa’s track entitled Nikli Koi Gal illustrates where the wife tells her husband that if she catches him cheating on her then she will kick him out the house. However if you watch the video all the way to the end you will see it was all a misunderstanding. But what was the misunderstanding…. Watch the video to find out.


Other tracks released in the month were Jattan Wali Gall by Vicky, 13 Pind by Rajvir Jawanda, BBBB by Khan Bhaini, PR by Gurnam Bhullar, Wangan by Shivjot, Chan Jeha by Naveen, Laare by Barbie Maan, Sheridan by Noor Tung and many more!


It has also been busy in the Pollywood industry:

In the month of November shooting begun in the UK for the film Maujaan Hi Maujaan starring Binnu Dhillon, Gippy Grewal and Karamjit Anmol.

You can now see Jazzy B, Neeru Bajwa and Rana Ranbir on screen together in the film Snowman which shows the dark side of Canada. Moving away from the usual romantic and comedy scripts, this film is something very different and a new path fro the industry to showcase.

Harish Verma and Sweetaj Brar will be starring together for the romantic film Tere Layi which will be releasing on 9th December 2022.