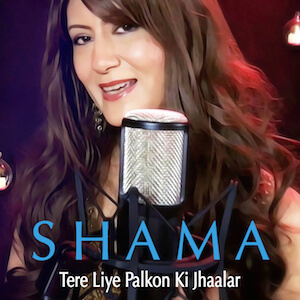 After a 3 year gap, SHAMA is back with a soulful cover of Tere Liye Palkon ki Jhaalar from the 1981 Bollywood movie, Harjaee, originally sung by Lata Mangeshkar, with music by R.D. Burman and lyrics by Gulshan Bawra.

Tere Liye palkon ki jhaalar is a beautifully message from a bride to her husband. It’s a celebration of love and caring - something many of us can deeply connect to after the turbulent year the world has had. A literal translation into English would be:

I weave a lace of eyelashes for you

Provide shade wherever the sun falls on you

Tere Liye has been recreated by Deep Koch, a vastly talented music producer and composer from India. Deep’s songs have been released on various platforms including MTV Indies, Doordarshan, All India Radio, Radio-Mirchi etc.

With this song release, Shama has proven that she is indeed inspiring and multi-talented. After learning recording software, lighting and video editing techniques, she recorded, shot and edited the video of Tere Liye by herself during lockdown!

Shama is described by Ehsaan Noorani of Shankar Ehsaan Loy as ‘a versatile singer with an ability to sing all styles of Indian music’. Shama is a talented and accomplished singer/songwriter. Her single Maahi earned her a spot as an Introducing Artiste on BBC as well as a nomination for best singer in the India-based ArtistAloud Awards. She brought more magic with 'Diljaani', with the video receiving over half a million hits in two weeks on a popular youtube channel! These releases were followed by Baarish and Jogan. In 2018, Shama’s cover of the 80s Bollywood song Aisa sama was very well received. Tere liye palkon is her second cover.