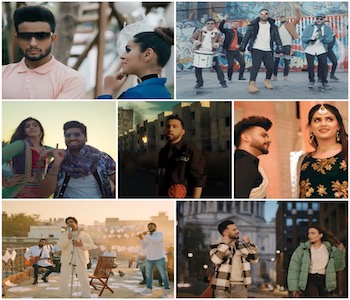 Every month we look back at the songs released in the past month so here are some of our top #Bhangra songs of January!

PropheC is well known for releasing touchy emotional songs. When it comes to releasing an album usually there are a mixture of songs where certain songs are liked more than others. However, although PropheC’s album ‘Solace’ only has 5 songs, they have all been liked equally.

Upcoming artist Jeeves released his debut single ‘Bang Da Ting.’ Bringing back an old skool vibe in his music I am sure it would have bought back memories for many of you. Check it out if you already haven’t!

The track ‘Beautiful’ by Shivjot and Gurlez Akhtar is about a journey between a boy and girl expressing their love and talking about making their families accept their love as they both will not be able to live without each other.

‘100 Vichon 100’ by Jenny Johal featuring R Nait illustrates that she doesn’t mind him reaching high goals and breaking records however just doesn’t want her heart to be broken.

Lyricist and singer Happy Raikoti’s single ‘Kamaal Kari Jaane O’ has received so much love. The beautifully penned lyrics by Happy Raikoti and music composition by Avvy Sra has done some sort of magic that this song is not one to be missed!

Other songs released this month were ‘Potale’ by Jazzy B and Sonu Kakkar, ‘Vacation’ by Nirvair Pannu, ‘Lahore’ by Jugraj Sandhu, ‘Titliaan Warga’ by Harrdy Sandhu, ‘Dooja Pyaar’ by Akhil, ‘Lamborghini’ by Khan Bhaini, ‘Heart Beat’ by Nawab and Gurlez Akhtar, ‘Rukh’ and ‘Black Life’ by Navaan Sandhu and many more!