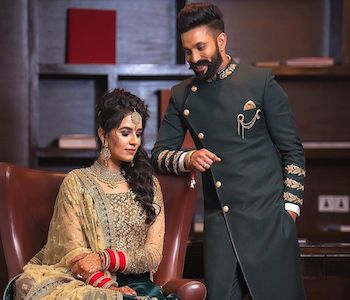 Dj Stin quotes “Over the past week I’ve been seeing a lot of tweets from accounts mostly from Canada but also from India talking about the Aamber Dhaliwal & Dilpreet Dhillon drama”.

First & foremost I would like to make it clear, domestic abuse whether physical or mental is wrong & anyone who abuses their spouse needs to be dealt with legally. The fact that an abuser thinks it’s ok to degrade someone who they see as their property makes you wonder how weak in the mind they truly are.

That is a factor in this situation which I will get onto in a moment but before that it is important to make a few other things clear.

This situation is something that doesn’t need to be aired in public, it was something that should have remained between both of them & their respective families, not thrown across social media for others to inflame just so they can get the pop corn out & watch the tamasha unfold. But this is the underlying problem, we live in an age where people crave attention & acceptance, artists included.

No disrespect to Aamber but her whole relationship with Dilpreet screams of social status gratification, from what I see anyway. Why else would she be in a relationship with someone who also lives to be known & thrives off the attention?

Fact is this isn’t something that is limited to these two, socials are full of people who are craving attention, the selfies, the hold my camera while I do a philosophical pose to put on the gram, follows, likes, views etc. This is the evolution of the Panjabi ‘tenu pata ni meh kaun ya’ mentality of old but now, it is amplified as it becomes global in the digital age. No one seems to want to put the graft in to even become DJs or MUAs anymore, photo thoko, hashtag lao te deh teri te, start sharing.

I digress, back to the point of this blog. I don’t know either of these guys but took some time out yesterday to watch each of their safiyan videos. Dilpreets came first & quite frankly you could see past the crocodile tears & the meh edha thordi kita yaar rhetoric. The man knows what he has done & as a man should own up to his mistakes, we all do things that we’re not proud of but only accepting them & learning from them can you go on to build character. Does everyone deserve a second chance, yes but in order to have that privilege you first have to address what it is that you have done wrong & own it.

One thing that he did say which I agree with is that it is not up to social media to decide the fate of their marriage but rather the two of them. It’s not like Twitter, Facebook, TikTok & Insta accompanied them on their 4 laavan. That said, by doing the video he invited the social universe back into the kacheri proceedings. See what I mean about craving attention?

So again, Aamber decides to utilise socials for her right to reply, not my thing but ok, she felt her story needed to be heard. At this point it makes me wonder why did people ever stop having vicholeh or arranged marriages, I mean it’s like when you buy something & pay with a Visa card, you’re protected, instead folks have started making direct bank transfers without checking the validity of the seller (everyone with successful love marriages no offence, thwadi jordiya sada Chardi Kallah vich rehn).

If there had been a trusted vichola, this matter could have been kept private & everyone’s dignity would have remained intact. Disclaimer, every situation is individual & I am by no means saying every vichola is perfect.

Aambers account of what happened frustrated me for 2 reasons, the first, I am a father to a daughter & that bond makes you a better person that always wants to see your daughter in the highest spirits. You may think this is old fashioned but you raise your daughter with love knowing that one day she will leave your home & enter into another family, the diamond you have preserved deserves to shine in her new home & you will always be protective of that. When you realise this, you also understand that a daughter in law entering your family is the treasure of her parents too & they have entrusted her happiness to your son & your family.

The second, is the whole story that she told. She was 19 years old when she decided that Dilpreet was the man for her, don’t get me wrong, there are many people who get married young & make it work (my wife and I got married at a similar age & grew together... aah bless). When there is due diligence done, usually by someone trusted the age isn’t an issue but in this case, by her own admission she was told about issues with Dilpreet but chose & even fought to make this marriage happen. You can’t help but be sceptical about the reason why, raising her profile?

Then you move on to when Aamber went to Panjab for wedding shopping & Dilpreet attacked her. Hello? He raised his hand to Aamber, left her bruised before they were married. Again as the parent of a daughter, I wouldn’t take this lightly & no way on this earth would I agree to this wedding. Prevention is better than cure. You might say ‘your being old fashioned & a girl has a right to marry who she wants', I agree you as a female have the right to choose but as a parent, you will always want the best for your kids. Letting it be known this marriage is not one you endorse would help the evaluation process that a 19-year-old would need to decide whether they still want to marry someone who has already abused you.

Even with that attack, Aamber continued with her plan to marry him. She then details his drinking & off behaviour. You then understand how manipulative an abuser can be to prey on the vulnerability of their spouse & genuinely feel sorry for her to have to live through that. Being thousands of miles away from your family & being beaten in your new home must have been terrifying. The frustration of her situation is understandable, the comment about her father in law, not so much.

Again going back to my earlier point, your in laws are like your parents as your union in the Anand Karaj makes you one, thus the respect you give to your own parents should be replicated. It works both ways.

At this point, the marriage was obviously not working & as such it should have been the point to call it a day. We learn that it wasn’t & Aamber back at home was trying to keep it going as a long-distance marriage. She commented how she would share her frustration with her mother who would reassure her at times but also advise her to end it if it wasn’t working. They are conversations that only they will understand & we don’t have a right to judge or offer guidance on, like the whole story it is not our place.

So why am I writing this blog? Simple, something that Aamber said that really wound me up. To understand what you are about to read, you need to take into account that Aamber has created a following of people who have connected with her on socials, most of them are probably young girls that look up to this influencer lifestyle. She has a platform to speak up but what about the thousands of sisters & daughters out there who don’t, they suffer in silence with little or no support. Hold that thought & read on.

Aamber then goes on to end the relationship by saying Dilpreet crossed the line by cheating, the right thing to do all things considering but the next lines of ‘I asked you not to do 1 thing, cheat, you can hit me, swear at me but don’t cheat, that’s all', what the fu...

No woman should even say something like that never mind live it. In Sikhi, we hold females in the highest respect & anyone who doesn’t agree with that is a fool, yet here Aamber is offering an invite to be abused?

The young girls who follow her, what lesson does this give them? In order to save your marriage, you should allow abuse? It is wrong to justify it as much as it is wrong to abuse.

Get counselling, take a break, do what you need to but don’t allow a beating to keep a marriage together, respect yourselves & hold your head up to assume the sovereignty our Gurus have bestowed on you.

For any sister or daughter reading this, your life is yours to live, please don’t accept abuse at any cost. Know that you have support by way of families, friends & if need be, support groups. An abuser will scare you but don’t be afraid, it’s what they want you to feel, be brave & speak up. You are key to our future, in years to come you will become parents to the children that will change the world for the better.

To our brothers & sons, respect & honour our queens, they will be you strongest supporters when we treat them with respect. The honour of our homes is an equal responsibility that is fuelled by respect.

To end, this whole saga should have been a private one. Those who give #fookarpamp to put people on pedestals in the social media age are the same ones to fuel the tamasha when things go wrong. Retain your dignity at all times.