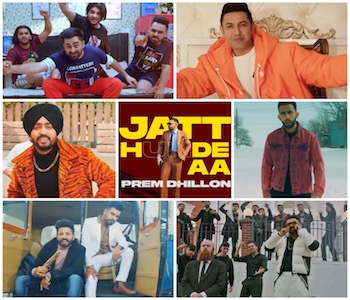 Every month we look back at the songs released in the past month so here are some of our top songs of April!

After a huge success of ‘Old Skool’ alongside Sidhu Moosewala, Prem Dhillon released ‘Jatt Hunde Aa.’ Even though it has a steady beat which was composed by San B, it is one which may gradually grow on you if it has not already done so.

PropheC is back with his heart touching songs. His recent song ‘Questions’ as you may have gathered is all about those questions that crop up in our minds when we think of the person we deeply loved however that relationship no longer exists. The deep lyrics makes the song sound even more realistic which people can easily connect with.

‘Himachal Wali’ by Manavgeet Gill is quite catchy. Even though the song has a steady beat composed by Hakeem, the way Manavgeet used his vocals was very clever making the song a bit different to the standard songs with a similar beat.

Even though we are all globally sitting indoors due to current circumstances Gippy Grewal has cleverly produced a music video entitled ‘Nach Nach’ involving many artists in the industry such as Jazzy B, Bohemia, Kulshan Sandhu, Sargun Mehta, Neeru Bajwa, Parmish Verma, Ranjit Bawa, Jassie Gill and Babbal Rai. Artists used their phones to create a clip for the video and to show we are all going through this together and keeping us entertained.

Over the month many artists have also released lyrical videos so they can continue to interact with fans whilst directing videos is currently not possible. Other songs released during the month were ‘Punjabi Munde’ by G Sidhu featuring Fateh, ‘Birthday Gift’ and ‘4 Saheliyan’ by Sharry Maan, ‘Lifestyle’ by Amrit Maan featuring Gurlej Akhtar, ‘Bazaar Band’ by Dilpreet Dhillon and DJ Flow, 'Kere Tho Shair' by Nash featuring Raxstar and many more!