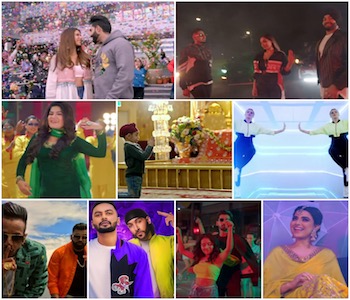 Every month we look back at the songs released in the past month so here are some of our top songs of July!

July has been a busy month with summer bangers, filmy songs and many more. It was only last month when Manni Sandhu and Navaan Sandhu teamed up for ‘Radio.’ And within a month they have released a summer banger ‘Do Pal’ with the vocals of Navaan and Bakshi Billa. They bought back the old summer vibes though a lyrical video.

The sensational singer Neha Kakkar releases a club dancefloor banger entitled ‘Sorry Song’ alongside Maninder Buttar. Even though the girl knows about the little mistakes and arguments her partner makes, she forgives him.

Film promotions are continuing but during July focus was on ‘Singham’ starring Parmish Verma and Sonam Bajwa which will be releasing on 9th August. After the Bollywood release of ‘Singham’ let’s see what the Punjabi version brings on the big screens. Looking at Parmish’s social media we can see a lot of hard work and training has been put in towards the film.

After a huge success of ‘Ardaas,’ the release of ‘Ardaas Karaan’ starring Gippy Grewal and Japji Khaira did exceptionally well. With exceptionally high ratings of the film and positive reviews this is a must watch film. If you watched ‘Ardaas’ you will know exactly what I mean. Words are not something that can describe this film. Once you watch it you will know exactly how you emotionally and mentally interact with the film.

‘Chal Mera Putt’ starring Amrinder Gill and Simi Chahal is another film which released last month. ‘Baddlan De Kaalje’ is a wonderful romantic track which illustrates a journey of how the boy will marry her and takes his love with him and her parents are so happy with this match. The lyrics have been penned extremely well by Bunty Bains and music composed by Dr Zeus.

Mannat Noor releases ‘Reshmi Chunni.’ With a modern music composition by Gurmeet Singh and wonderful lyrics by Harmanjeet Singh it is an enjoyable summer track to listen to.

After the full release of the album ‘Pehli Tape’ G Sidhu teamed up with Amar Sandhu to release ‘Delete.’ Something fresh and new by G Sidhu as he moves away from Bhangra dancefloor bangers to more of a club beat track.

Other songs released during the month were ‘Baby Baby’ by Mankirt Aulakh, ‘Worldwide’ by Jazzy B, ‘3 Fire’ by Sharry Maan, ‘Sandhuri Rang’ by Kaur B, ‘Paap’ by Kulwinder Billa, ‘Burj Khalifa’ by Himmat Sandhu and many more!