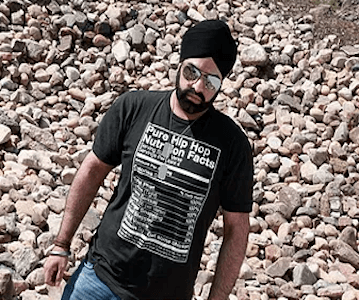 Rupinder Rainer caught up with Patwant Singh to find out a bit more about him and his interest in music.

Patwant who grew up listening to Bhangra music from UK as well as Punjab, created a vast knowledge of the industry which he has applied as a DJ and a Radio Host.

Is music your full-time career? When did you start getting into production? What is your inspiration?

Although there are times when I spend more time on music than I do on anything else, music is not my full-time career. I first got into production in 2003 after being a musician for many years and being inspired by the UK Bhangra scene at the time. I had become a DJ in 2001 and with that and being a musician, production was just natural to go into.

What do you think are the keys to making a track successful in the Punjabi music scene especially being in the Canadian market?

I think a song needs to be timeless; something you can listen to 20 years from now. Along with that, something that has meaning and you're able to listen to with anyone in the family.

The Canadian market is full of talent. I think to be successful in the Canadian (North American) market, you need to understand multiple music genres (Hip Hop and Rock for example). The listeners growing up in Canada will have a wider variety of musical tastes that they listen to.

Being a Punjabi artist, you have to find a balance of the Punjabi side with some western elements.

As someone who doesn’t do things by the norm, do you think there’s enough support for creatively expressive artists from the media?

I think 'support' is subjective; it all depends who's supporting you or where you're looking for support. If it's from family and friends, then you have it usually.

If it's from other artists etc., it's hard to get because most artists follow trends and the market.

However, having said that, I feel like people are now craving original and different content. You listen to most music these days and it sounds the same if not similar. I try to stay away from that.

I think the goal of the music (as an art) is what defines this. Personally, I make music for the art and to attempt to put good stuff out there.

A lot of the industry has changed since I first started. Usually you're only supported now if you're popular, trending, or really liked; ultimately, if you're going to get likes or make money, you'll be supported.

Ultimately though, if people enjoy your music, you'll eventually gain support - it may take longer, but you have to keep at it and have faith!

Moving on to the new release, tell us a little bit about your latest track Billouri Akhiyan?

How long has this process taken to release this track and music video? What was involved in making it all happen?

Billouri Akhiyan was created with the intent of putting a timeless and pure love song out there that is both family friendly and artistic.

The process has taken about a year from the initial idea to the final release: Captain and I were both lucky to both be in the same city to work on everything, but with Covid 19, a lot of extra time was needed due to government restrictions.

Being on the same page with the intent of the project was what made it happen. We both wanted to create something that expressed our artistic sides, as well as give music lovers something original.

The project is a perfect combination of classic lyrics and vocals, blended with a clean and balanced musical vibe.

As a music producer, what challenges do you face in making the music?

The biggest challenges are to find like-minded people to work on projects with. A lot of people these days have individualistic wants and desires when working on projects and cannot function with/as a team.

Other challenges being a producer in Canada are having artists go work with in person. There's so much talent in the country but some of us artists are scattered throughout the country, so working together in person can be challenging.

There are Punjabi songs that could be argued that are not appropriate to watch and listen to with families. What are your views on this?

Regardless, there's tons of videos that are out that I'm not going to watch with my family around. At the end of the day, it's up to each artist to decide what type of content they make. Then up to media to decide if it's shown or not. Not every artist care if families watch or not.

Do you feel the Bhangra scene is suffering because producers are, generally, relying too much on their signature sound?

I don't know if it's suffering, but I feel like most songs in the scene have one underlying signature sound (Giddeyan Di Rani Dholki Loop or something similar). I remember the days when I used to listen to different artists when I was feeling a certain type of vibe - there were a variety of different sounds and styles.

Many artists and songs are beginning to sound the same though. Signature sounds are even dying off and starting to blend into other artist' signature sounds.

What is the most challenging aspect of being a producer?

For me it's balancing time with other commitments like work and family. Whenever I'm in the studio I lose track of time and even sometimes forget to eat.

What differentiates you to other music producers in our music industry?

I try to make my music as a form of art opposed to anything else. I want it to make the listener actually feel, not just hear the music

Before we conclude this interview, is there anything you wish to say to the readers of SimplyBhangra?

Honestly, you're all the best! Always love connecting with you all.

SimplyBhangra.com has been around almost 15 years now and you readers are the reason for that.

Keep supporting your favourite artists by supporting this amazing platform.