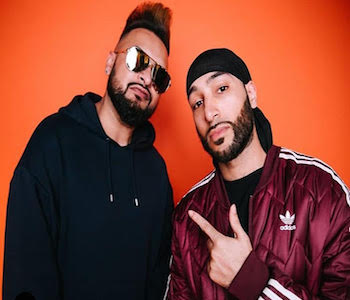 Rupinder Rainer caught up UK artists Manni Sandhu and Gurj Sidhu two artists currently that stand out in the industry for testing new styles of Punjabi music and willing to take risks.

Manni and Gurj have recently collaborated and released the track ‘Verified Jatt.’ Also, in November last year they presented us with ‘Challa Part 2’ presented by BBC Asian Network.

Firstly, Gurj let’s start with you. Your one of the few UK vocalists who have stood out in this competitive market. Who are the ones you believe have the potential to push their music in the UK?

To be honest I don’t think it just an artist, I think the UK just needs to release more music. The more content that is out the more it will get noticed because it’s become one of them games where there’s so many releases happening especially in India and Canada that I think the UK lacks on quantity.

So, if we get our quantity but with the quality out I think the UK scene will be banging!

But how do you think people with balance the quantity with the quality?

That’s just hard work! I’m not bigging up my own trumpet but I’ve been releasing consistent music. Not everything is going to be an anthem but as long as you are putting out good music it keeps you interacted with your fans, they know who you are, what you’re doing and what the movement is and I think if people have that mindset UK can definitely be on top.

But do you think their style of music with start becoming repetitive to their previous songs?

That’s all down to yourself or the producer or the idea you could say. Generally, if you got an idea and up for working on new things and taking risks because I will give you an example, me dropping ‘Deep Obsession’ that was a video track of the album which was a drum and basstune. That is something which was a bit abnormal for that time.

We did it because we believe in our stuff. I think if people just make music and don’t think about what people want, then as long as they have decent visuals, decent PR’s and the language they are singing in is bang on there’s no reason for it not to do well.

And Manni coming to you now. What do you think is the most challenging thing about being a producer?

I think staying relevant, that is always overlooked. You can’t get too much stuck in your own style. You need to keep up-to-date with what is going on and what the youngsters are listening to. It is very important and it can be quite difficult to do because you need to step outside your own comfort zone and try different styles.

And like what Gurj was saying about being consistent, that can be tough for people and having a release every 6 weeks is a tough job but I would say those are probably the two main things that lead to success.

And you have worked with artists from India as well. How do you think they are different to the artists in the UK?

They basically treat music like it is their life. I’m not saying that doesn’t happen in the UK but I find in India they literally sell land to release an album. In the UK it’s a little bit more chilled out.

You get singers like Gurj that do this full time and this is their life. So maybe it is the mentality that some of the people have from India that it is this or nothing that makes them succeed.

How do you make your music stand out?

I have got my own style, I got my own sound. I’m fusing that with what is in at the moment. So obviously when people hear a song they know that’s a Manni Sandhu song but it’s all about making that fit and what’s currently working.

So, it’s staying relevant to my sound, my style and my image as that is always going to be associated with me.

Have you got any future projects?

Yes definitely, there’s a lot more coming out, with Gurj and a lot of other singers. Like me and Gurj we are both at that point where we want to drop something every 6 weeks. Sometimes it may be delayed, it might be 8 weeks but that’s our aim. If we don’t have something coming out after 6 weeks we are pressured like ‘What’s going on? We need to hurry up and drop something.’

It wasn’t like that 6/7 years ago when you could drop something a year after and it will be chilling but now you need to be out there and people want to see you on social media promoting your song and releasing something on a regular basis.

So... loads of projects! This year is going to be a very exciting year for myself and Gurj.

Thank you Manni and Gurj and looking forward to your future projects.