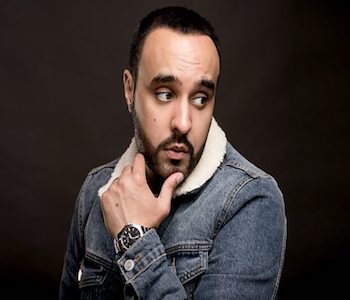 From producing the music to tracks such as ‘Fresh’ by Garry Sandhu and ‘Putt Jatt Da’ with Jaz Dhami to releasing albums such as ‘Starve the Ego,’ GV has created his own path of music.

Through his recent album he wanted to send a message to his audience which would drift them away from all the negative things happening in today’s society to thinking of the positive ways people can change themselves.

Rupinder Rainer received the opportunity to catch up with GV to talk about the music industry!

What is the most challenging aspect of being a producer?

Getting paid for your work and dealing with inflated egos.

How are the concepts for your tracks created?

I don't really have one set process for creating a song. I never sit around thinking of concepts, ideas just come to me randomly. Life inspires me.

Totally agree that music has no barriers, it’s great that you as a band are creating new different sounds and thinking outside the box. Do you somewhat feel you have opened doors for others to experiment with music, like you have?

I don't know if I've opened doors for others to experiment, but I hope I've inspired up and coming artists to be original and create their own vibe. I think it's important to do your own thing and not copy others. The shelf life of an originator is much greater than a copycat.

Why aren’t Asian sounds present in the mainstream all the time? What changes need to occur to make that happen?

Everybody is too obsessed with this term 'Mainstream', the mainstream for Punjabi music is India.
As far as sounds, there will never be a time where Asian sounds are present in mainstream music "all the time" because music goes in cycles.

Sometimes sounds from Jamaica are popular, sometimes Latin America, sometimes the Middle East, and so on. It is what it is.

Why do you feel Bollywood is turning to UK Punjabi artists now, and is that transition something you’re aiming for your own brand of BollyHood to be a part of?

I think it's great that Bollywood are turning to UK Punjabi artists, but I don't like how certain people are stealing music from the UK scene and passing it off as their own content! Give credit where it's due.

I'd be open to the idea of producing and/or writing a Bollywood song if the opportunity presented itself. It's not something that I'm actively chasing at this moment, but you never know what the future holds.

With the stand-out lyrics and distinctive production in your recent album do you think this case illustrates that, especially now, listeners are seeking something fresh and original?

There's always room for something fresh and original, but within reason. I think listeners prefer tried and tested commercial music, and less of the experimental/more thought-provoking content.

I believe most people want an escape from reality with Punjabi music.

What projects do you have going on at the moment or are expecting to work on in future?

I have 2 singles (and accompanying videos) ready. I'm also working on a new project called 'Feed the Soul' which will be out soon.

What would you like to say to the readers and fans?

I would like to send out a heartfelt thank you to each and every person that has enjoyed my music, taken time to message me and just in general given my sound the time of day.