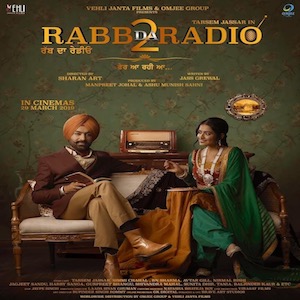 ‘Rabb Da Radio 2’ which will be releasing on 29th March 2019 presented by Vehli Janta Films and Omjee Group.

In 2017, there was the release of the Punjabi film ‘Rabb Da Radio’ starring Tarsem Jassar, Simi Chahal, Mandy Takhar, Ammy Virk and many more!

The movie was very traditional and based around the past lifestyle in villages of India. The story told a romantic story of how couples used to go through the marriage process through choosing their partner to marriage. There were no long talks or several meet ups between couples. It was very basic and simple!

The film won many awards at the PTC Punjabi Film Awards 2018 such as:

However, it has been announced shooting has commenced for ‘Rabb Da Radio 2’ which will be releasing on 29th March 2019 presented by Vehli Janta Films and Omjee Group.

The movie will be starring Tarsem Jassar, Simi Chahal, Nirmal Rishi and more. It is directed by Sharan Art, produced by Manpreet Johal and Ashu Munish Sahni and written by Jass Grewal.

Watch this space for more updates!