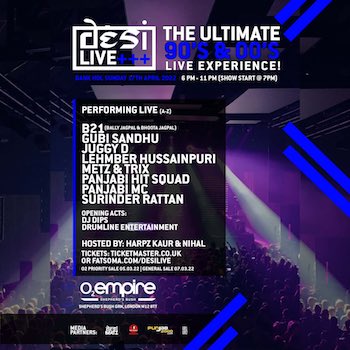 Desi Live - the ultimate live music experience is BACK!   Desi Live have selected some of the most recognisable names of that era to present you with another unforgettable night of nostalgia!

Following on from our historic show celebrating the best of the 80’s and 90’s with Malkit Singh, Apache Indian & more - this next instalment focuses on the generation that really built on what the previous icons worked to establish - fusing their influences with the emerging sounds adopted from the increasing influence of Western culture & sounds that first and second generation kids grew up with. The U.K. became the international gateway for modern asian music & artists album sales and fame exploded globally as a result!

Desi Live have selected some of the most recognisable names of that era to present you with another unforgettable night of nostalgia!

O2 Shepherds Bush Empire : One of the most iconic venues in the UK, ‘The Empire’ has seen a who’s who of iconic artists, with everyone from Ed Sheeran to Sidhu Moose Wala having headlined it previously. Finally, this West London venue welcomes back this golden genre of music & era for one night only!

PERFORMING LIVE ON THE NIGHT!

Desi Live presents a showcase of three the key pioneers who were a part of one of the most beloved sub genres of music that fused the influence of UK Garage Sound with UK Bhangra! Enjoy a special presentation of these three northern powerhouses especially on this night only!

DOORS OPEN 6PM PROMPT!
SHOW STARTS AT 7PM SHARP! EARLY ARRIVAL ADVISED SO YOU DO NOT MISS ANY OF THE ACTS!!

THIS EVENT IS OPEN TO FAMILIES BUT STRICTLY IN THE SEATED BALCONY SECTIONS ONLY!
Under 14s must be accompanied by an adult over 18 years old at all times and seated in the balcony.
Under 25s require ID to purchase alcohol. No Under 8's!