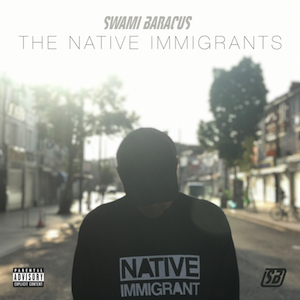 Taken from the same name as his weekly running podcast, The Native Immigrants sees the Baracuda challenge racism head-on, as well as deliver an impactful message to the South Asian community as a whole. With production provided by long-time collaborator Nutty P, SB provides super-charged and potentially controversial bars with a passionate delivery and without filters!

SB had this to say, ‘The Native Immigrants is a rallying call, not just against racism, but also our own community. We stood side by side fighting the Far Right in the 70s, and now even when there’s social injustice so prevalent in UK society, we’ve segregated ourselves from each other, rather than being a collective community once again. Strength in numbers is how we overcome prejudice, so let’s stand united once again.’

The official music video is out now, and was shot in Swami’s old home town of Southall, and features content from the history of the town itself, including images of first-generation immigrants and footage of the Southall riots of 1979. The single is also available to purchase and stream now across all online platforms.