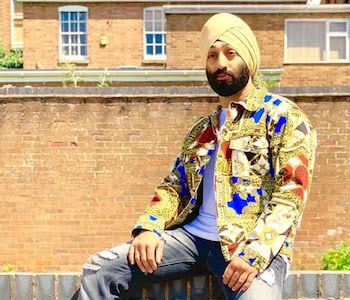 Subaig Singh is truly a transatlantic phenomenon who has brought a fresh and unique sound to the world of Punjabi Classical, Folk music, Bhangra and Punjabi Pop music.

With songs such as Jungle, Warrior, Flying High and Sochi Na we caught up with him to wrap 2020!

What can we say about 2020. As we all know this year may have not gone the way everyone expected but many took this time to think about their future and maybe try new paths.

To be honest, having more time on my hands has given me more time to think and come up with new and creative ideas. I have written a few songs myself and it’s given me time to think and plan for the future. In life you have to turn negatives into positives and try and capitalise and make the most of any situation so I guess that’s what I have been trying to do.

Some artists look at the type of music which are currently doing really well and try to release something similar to avoid risk and keep their name know in the market. Subaig said:

I just focus on my own music to be honest. I find it easier to keep my head down, work hard and keep pumping out the tunes. I don’t really get stressed out too much about what other people are doing. There are no rules to this game. It’s art. Let people express themselves however they want and let the audience judge their work as they see fit.

It’s hard to predict what is going to work and what isn’t. I’m sure people who have produced in the way described above have thought about it and have their own reasons for doing so.

It is not an easy path to become an artist. And fans are always interested in finding out how an artists journey has been and how they have reached where they are today. Some open doors for newcomers to show testing out new music is risky but can be worthwhile.

Has Subaig opened doors for others?

It’s a very satisfying feeling when you inspire and motivate others. In this era of music, and with the volume and scale of music being created every day, experimenting with music is a necessity for survival, rather than simply just a choice. That’s what I think, anyway.

Asian sounds are not always present in the mainstream.

Western music, sounds and English language are always going to dominate ‘mainstream’ music in a western country like the UK. English is a global language so has greater global reach. Very difficult to expect regional languages from the Indian subcontinent to have as much reach. I don’t think we should concern ourselves with trying to make Indian music mainstream in western countries.

In India, Indian music is mainstream. The main market for Indian music will always be Indian audiences and that is where the focus of artists should probably be, most of the time. It’s very important to be clear who your audience is and then to cater for them directly.

With the stand-out lyrics and distinctive production in Subaig’s recent releases do we think this case illustrates that, especially now, listeners are seeking something fresh and original?

Definitely. There is room for everyone in this game. Variety is the spice of life. If I can create different, cool and interesting stuff for my audiences, then that is the best way I can stay competitive. I guess some people just want the same old stuff and others want to hear something different.

Neither is wrong. But for me, if I stick to one sound, and just keep repeating it, I find it a bit boring and depressing. I need variety to keep it fun and enjoyable for me.