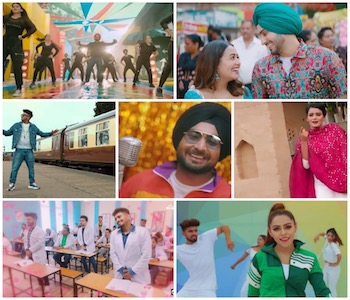 Every month we look back at the songs released in the past month so here are some of our top #Bhangra songs of October!

In the Punjabi film industry Ammy Virk and Sargun Mehta has always proved to be a great collaboration. Their films such as Angrej and Qismat have been a success worldwide. If you have seen their social media accounts such as Snapchat and Instagram you will see they have a close friendship and have a lot of fun on shoots. Recently releasing an upbeat track ‘Taare Balliye’ you can see the ‘masti’ through their acting.

Extremely talented singers, Neha Kakkar and Rohanpreet Singh both worked together for the track ‘Nehu Da Vyah.’ At this point many were confused whether the marriage was a rumour and the videos and pictures on social media were to promote the song. However, this confusion was cleared a few days later when we found out they actually tied the knot.

As we know Prabh Gill is great for his romantic songs, however Akhil is one that should also be added to the list. The lovely lyrics to his recent song ‘Bachalo’ were penned by Nirmaan and music composed by Enzo.

It takes some singers time to adjust in the industry. Maybe their first few songs may not be known worldwide. Navneet Mann entered the industry in 2018 with the track Dariyaan, then the following year released Geet Goreyan De and recently released Kudiya Kehdiyaa. Even though she has not released many songs to date, when you listen to her voice you will see that she has the potential of being very successful.

If one singer keeps having the same type of music composition in their songs they may not be successful in the long run. Recently Jenny Johal has been experimenting with new ideas for her songs. Moving towards a modern beat in her songs such as in ‘Repeat Soniye’ and now with her recent release ‘Hypnotic Eyes.’

Other songs released in the month were ‘Impress 2’ by Ranjit Bawa, ‘Time Chakda’ by Nimrat Khaira, ‘Zindgi’ by Harjit Harman, ‘Roi Chal’ by G Khan, ‘Jaan’ by Gurnam Bhullar, ‘Sohna Sohna Munda’ by Miss Pooja, ‘Udeekan’ by Nirvair Pannu, ‘Adhiya’ by Karan Aujla and many more!