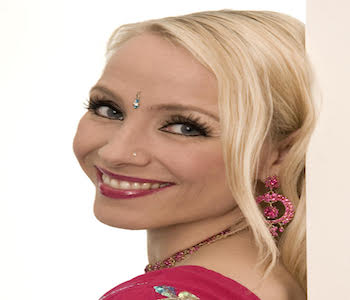 We got the opportunity to catch up with Anita Lerche to ask about her views on the music industry.

Anita Lerche is a Billboard Top-5 Charting Artist and an internationally acclaimed award-winning singer, songwriter and composer. She originates from Denmark and was the first non-Asian woman from the West to release an album in Punjabi. Known as ‘Heer From Denmark,’ Anita has been touring the world, received numerous Awards & Honors, including “Best International Artist” at the UK Bhangra Awards 2017.

Anita has been featured on several music collaborations, including “Aao Ji” with King Gurcharan Mall. She has evolved into a prominent figure in promoting Punjabi music and culture on an international scale. The album 'Sadke Punjab Ton,' an ode to the culture that has changed her life.

‘Bhajans’ is an album with Hindu Devotional songs about Unity & Love and Anita has also plans about recording an album with Shabads. Anita's passion is to spread happiness and love, bridging people across cultures and religion through her singing.

I would make a music video about the life and teachings of Guru Nanak Dev Ji with Film Maker Harjit Singh. I imagine to shoot the video in India, Pakistan and 2-3 other countries, where Guru Nanak Dev Ji travelled. The music would include instruments like the Rabab and Saranda.

Since the world is more and more becoming one big melting pot, I believe a fusion of different music styles could be interesting. Also getting more Bhangra music placed in Hollywood movies and serials. I would love to see more Punjabi live music all over the world and showcasing the authentic and original bhangra music more on the music festivals.

Being an Artist is also about being true to yourself and your audience, and always give your best. Keeping one’s integrity.

I think it is a gift to be able to share the Bhangra music with the whole world, as the music can inspire, uplift and spread waves of positivity.

The whole change in the music industry into the digital age has affected Artists world wide financially. I think Artists in general are full of creativity, but collaborations and financial support from individuals and bigger companies could be the key.

As a part of the 150 years birthday celebrations of Mahatma Gandhi, a grand Tribute video collaboration of his favorite Bhajan “Vaishnav Jan To” was created together with Singers from 155 countries. The Indian Embassy in Denmark chose Anita to represent Denmark in this iconic video collaboration of Mahatma Gandhi’s favourite Bhajan “Vaishnav Jan To”, sung in Gujarati.

The video was launched by Indian Prime Minister Narendra Modi one year back on Oct 2nd. Anita received an appreciation certificate from the Ministry of External Affairs India on the occasion of this years India Independence Day in Denmark and the Consul General of India, Chicago, invited her to perform "Vaishnav Jan To" at the Mahatma Gandhi 150 years celebrations taking place at Chicago Arts Institute.