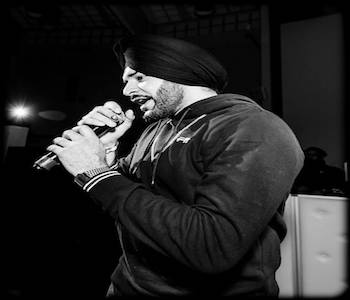 SimplyBhangra continues to liaise with artists and ask them about their year and what they have planned for us in the coming year. Now Jovan Speaks to G Sidhu!

G Sidhu became a household name around the world in 2017 and he got even bigger in 2018!!! 2018 was a year to remember for Sidhu with 4 huge tracks but not only that... but he is also a doctor by profession which in itself requires much time and dedication.

I spoke to G Sidhu about his year and he had this to say " I enjoyed all 4 songs I released this year and each one was very different from each other and had its own vibe. Red Rose, Credit Card, Oh Teri! and Hip Hop".

2018 was a huge year for the Punjabi music industry as their were many great tracks released this year especially a huge year for artists in North America as artists are creating content which is being played all around the world in clubs and dancefloors all over the world.

I asked him what his favourite tracks of the year were " There's been some amazing music released this past year, I am probably blanking out on a lot. Few tracks on the top of my head would be: Sidhu Moosewala - Dollar, JK/Tru Skool- Shindeh Di Tape, Mickey Singh - Tu and Diljit - Jatti Speaker.

Credit Card and Hip Hop were his biggest tracks of the year creating buzz everywhere. Credit Card had a Bhangra vibe and the lyrics are very relatable to the younger crowd which is his main fanbase. The music for the track was done by J Stakic and the video being done by Director Dice.

G Sidhu then dropped Hip Hop in October which instantly became a fan favourite as well. The chorus 'Bhangra Paun Mein Tha Gaya Si, Hip Hop Da Step Lohn Lag Paye' had became a hit with everyone as Punjabi club events and family parties seem to turn into raves by the end of the night going from Bhangra to dancing in clubs.

When asked what we could look forward to from him "In the future, I have my final installment from Pehli Tape, followed by a few singles. I also have written few tracks for other artists, which shall be dropping soon as well! Another big project I am working on which I am very excited about and will announce in timely fashion😊."

You can watch G Sidhu's Credit Card music video below!