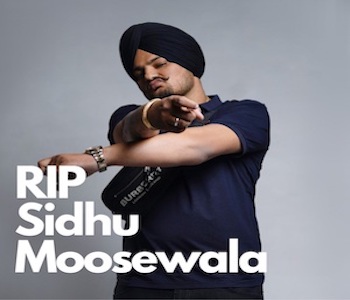 SimplyBhangra.com is sad to report Sidhu Moose Wala, Punjabi singer and Congress leader was shot dead near Mansa on Sunday 29th May, he was aged 28 years old.

Shubhdeep Singh Sidhu, better known by his stage name Sidhu Moose Wala. He was shot dead in his car on 29 May 2022 in Mansa, Punjab, by unidentified assailants. He was traveling with two of his friends. A number of rounds were fired during the incident which also injured two other men.

He started his career as a songwriter for the song "License" by Ninja, and began his singing career on a duet song titled "G Wagon". Following his debut, he collaborated with Brown Boyz for various tracks which were released by Humble Music.

He made his debut in Punjabi cinema in the film Yes I Am Student under his own production company Jatt Life Studios.

In 2021, Moose Wala released Moosetape, tracks from which charted globally including Canadian Hot 100, UK Asian, and New Zealand Hot charts. He had faced legal challenges for promoting gun culture and using inflammatory and inciting lyrics in his songs.