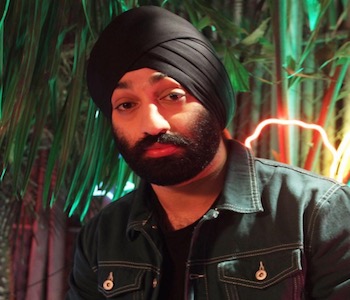 We caught up with Subaig Singh to get his views on this competitive industry.

Many people dream of being in the music industry, however only a handful of artists are extremely successful, some gradually grow and some which slowly disappear. There are many reasons for this such as market competition, uniqueness in work or tactics used to overcome obstacles.

As the industry has evolved over the past decade, the majority of income for artists now comes from shows and live performances; do you think this model is sustainable in the long run?

Everything in life is evolving all the time. It is hard to know what is sustainable and what isn’t. What we have now is all that I know as I wasn’t in the industry when things were different. It is so much easier to market yourself in this day and age with the help of Facebook, YouTube and Instagram and you can make yourself accessible to more people than you ever could before.

We are less reliant on the support of big record labels and as artists, we can be in complete control of what we do, what we release and where we perform and whether we want to perform. The music industry is a game like any other industry.

It is up to the artists to understand the ever-changing rules. If we don’t adapt and evolve, we die. It’s natural selection in action. If we can’t change with the times and lose out as a result, we as artists only have ourselves to blame.

A lot of Bhangra artists/producers have had mainstream success with their distinct styles. Where do you see the industry in the next decade?

I think it’s hard to know what the future holds. I can certainly see more collaborations with mainstream artists and Bhangra artists using more Western influences with their music. We are already seeing a lot more songs with English mixed with the lyrics in the tracks and the increasing use of the Western instrumentation as opposed to the traditional folk instruments. I certainly see a lot of more fusion going on in the future.

Can a bhangra artist/producer still be at the top of his game without going mainstream?

Yes of course, you just need to have a big enough following or fan base in your chosen genre to keep you afloat. We only have to look at how big stars like Diljit are who are not mainstream. Tastes very so much between countries, ages and the sexes. It’s not possible for one type of sound to be able to cater for all tastes.

Producers, artists and video directors need to constantly keep an eye on the different audiences how their tastes are changing and ultimately, we are here to serve the public and give them what they want. Occasionally, we take a risk or gamble and try to give them something that they haven’t had before and see how they react. You never know which new thing might capture the public’s imagination.

Versatility is the name of the game. We live in a world where the music industry is saturated. Not only is it saturated, the competition is very stiff, and the audience has a short attention span. I also appreciate that there are differing tastes out there and it’s not a case of one size fits all. I have tried different genres of sounds to reach the different audiences.

Although, my personal taste is old skool folk, I have enjoyed experimenting with different sounds by working with different music producers and the feedback has been very interesting! I’m lucky that I’m not tied in with anyone and I’m a free agent so that I can be creative without any strings attached.

The enemy of progression and evolution is becoming a boring stuck in the mud artist that only does one thing and never changes it. I will certainly continue to experiment with new sounds as tastes changes but with my regular, favourite traditional bhangra drop every so often!

Whenever you listen to a Bhangra track, there is always this ‘nerdy obsession’ with instrumentation to see if an artist has maybe used something different such as an electric guitar. Where does your inspiration come from when you’re looking for something original or fresh to add to a piece of music?

I like all old folk instruments from around the world because I think they really touch the soul. I’ve not been a big fan of the engineered sound but accept it does sound very good at times and not totally opposed to it. So, I do tend to leave this to the music producers who are working on my tracks.

I always give them a brief though before starting work, to explain the kind of track that I am looking for and sometimes even provide a reference track to give them an idea of what I want. I don’t like to tie their hands too much. Inspiration comes from all over. That’s the beauty of the creative process, you don’t know where a good idea is going to come from.

It might pop into your head randomly, or something that you hear on the radio or listen to on TV might spark something. I think creativity must come directly from God and he puts these crazy ideas into our heads, ha-ha.

Do you think artists need to be more original and stand out to maintain longevity?

Yes definitely. The market is saturated with artists emulating the same look and sound. If there is nothing unique or different about you, you will be lost in the sea of all the other millions of artists out there trying to do the same thing. It is about brand development whether it’s doing the same or something different each time and keeping the audience on their toes.

It is definitely down to the audience. Artists are naturally creative by default. If they were not, they wouldn’t be artists. But artists are only a direct mirror and reflection of the public that they serve. Audience demand is the single biggest driver for musical content.

If the audience is unhappy and starts to demand something new or different, the artists will naturally make adjustments to accommodate that. It is governed by economics as well; it’s too risky for artists and labels to spend money on super creative artistic projects that are not tried and tested or field proofed by the audience first... but when an artist does take a risk and it works, the results can be explosive.

This was Subaig’s view on the industry. Check out part two, which we will be releasing soon, where we will be looking at Subaig’s career and his music.