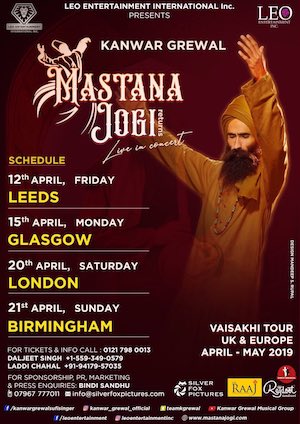 After his highly successful 2017 UK Tour, the Prince of Sufi Kanwar Grewal is back in 2019, performing some of his greatest hits and latest releases at state-of-the-art entertainment venues in a city near you.

Produced by international promoters Leo Entertainment International Inc supported by SimplyBhangra.com, the “Mastana Jogi” will be performing in the following areas with his full live band from India!

Long gone are those days when Sufi music was exclusive to the dargah’s or shrines belonging to religious figures from yesteryear. Fans of Sufi music and sufiana poetry can be found the world over, in various cultures. From the 13th century Iranian poet Rumi to the 20th century qawali maestro Ustad Nusrat Fateh Ali Khan saab, sufism has influenced them all. Today, the torch of this unique mysticism is being led in the 21st century and beyond by the spiritual ascetic, Kanwar Grewal.

After his highly successful 2017 UK Tour, the Prince of Sufi Kanwar Grewal is back in 2019, performing some of his greatest hits and latest releases at state-of-the-art entertainment venues in a city near you. Produced by international promoters Leo Entertainment International Inc, the “Mastana Jogi” will be performing in Glasgow, Leeds, Birmingham and London with his full live band.

Having, within a short period, carved himself a place within the top names of the Punjabi music industry, Grewal continues to attract the young and old alike to his charming yet quaint personality. His appearance of brightly coloured yet plain kurteh -pjyameh with a matching parna on his head is usually accompanied by a black shawl/lohi in which he easily wraps himself in, maybe symbolising the recluse he is.

This Jogi may have chosen the austere and self-abnegating life, but his talent showcases his real riches. His unusual earthy voice washes over you, drenching you with his powerful aura. No one who has seen him perform live has any doubt that Grewal, whilst singing is in a world of his own, establishing his connection with his God. It is therefore not a surprise that all his songs including the smash hit ‘Akhan’, ‘Daultaan’ and ‘Ticketaan’ have that underlying theme, to connect oneself with the divine, the almighty, to have a clean heart and do good to others. It is a message which appeals to all without discrimination.

Speaking at the launch of the UK Tour posters, Daljeet Singh, CEO of Leo Entertainment International Inc said, "What sets Kanwar Grewal apart from the rest of the herd is his simplicity. He lives the message that he preaches on stage and connects with the audience like no other. His prayer like singing, child-like carefree dancing and heart-warming stories leaves audiences feeling more wholesome and appreciative. We are extremely proud to be bringing the 'Mastana Jogi' tour to his thousands of fans in the UK one more time."

Tickets for the Mastana Jogi UK Tour 2019 are on sale now.