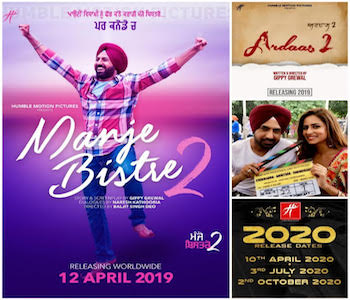 It seems like there is no stopping to Gippy Grewal. 2019 has not even arrived yet and he revealed his film calendar for 2020.

Gippy shared a picture on his Instagram and Snapchat which have 3 releasing dates of 3 movies from his banner Humble Motion Pictures.

It would be interesting to know what kind of films are these going to be.

Talking of 2019, his first film releasing will be "Manje Bistre 2" on 12th April 2019, sequel to 2017 blockbuster "Manje Bistre". Apart from this, he also shot one film named "Chandigarh Amritsar Chandigarh" with very talented Sargun Mehta. And he will direct one more film this January 2019 that's "Ardaas 2", sequel to 2016 superhit film "Ardaas", the film which gave him lots of love and respect and will release in 2019.