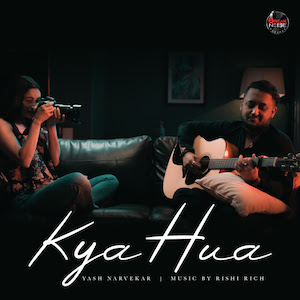 Break The Noise Records is proud to present the soul-stirring journey of Kya Hua with the multifaceted Yash Narvekar!

Love is a soulful and beautiful experience.

But what happens when love isn’t enough?

What happens when something other than love takes over?

Kya Hua depicts a twilight kind of love, but a doomed and destined heartbreak. The song, written and composed by Yash Narvekar himself, was created 4 years ago when music producer Rishi Rich made a move from London to Mumbai and the first artist he met was none other than Yash.

Kya Hua channels personal experiences of Rich and Narvekar and was the first record that they ever created together.

Singer-songwriter Yash Narvekar from Mumbai has been making some serious noise within the music industry over the last few years. Taken under the wing of Mohit Suri as part of the Universal Music India venture VYRL Originals; Narvekar has been a frequent collaborator with Rishi Rich delivering songs such as 'Mere Dil Mein' (Half Girlfriend), 'Teri Yaadon Mein' (Behen Hogi Teri) and both powerhouses have even composed soundtracks for high profile promotional videos.

Classically trained since the age of 13 and also a law graduate, the unstoppable Narvekar delivered his biggest hit earlier this year, “Muqabla” for Street Dancer 3D and also featured on a duet with Bollywood queen Neha Kakkar for 'Ek To Kum Zindagani' (ft Nora Fatehi) for the movie Marjaavaan.

Yash’s passion for melody and all things music has enabled him to compose great songs for Alt Balaji’s hit web series 'Broken', for Cine 1 with 'Never Kiss Your Best Friend' and he has even participated in the singing show ‘The Remix’ on Amazon Prime Video.

Leaving no stone unturned, Narvekar has seen great success in the independent music scene especially with his debut non-film single 'Teri Yaad' which hit Platinum status. Yash has also collaborated with the stunning Akasa of Sony Music India for 'Feel The Vibe' and more recently Jhalle Khalle a collaboration for Artist Originals (JioSaavn) charted at number 15 on the Billboard Triller charts.

Not one to let all of his success thus far blind him, Yash Narvekar is a formidable artist with a one of kind voice and persona. This latest release, 'Kya Hua' with Rishi Rich and Break The Noise Records, sheds a raw spotlight on not only Narvekar’s vocal ability but also his skills as a lyricist and song composer.

An accompanying video for 'Kya Hua' was conceptualised and directed by Break The Noise Records’ very own RDV in a beautiful farmhouse in Lonavla.

The video stars Yash and Asha Sharma in lead roles of a heartfelt but damaged love story. The visuals capture the beautiful moments of being in love but also the downside to rejection, loss, pain and not being able to move on from a relationship in a healthy way.