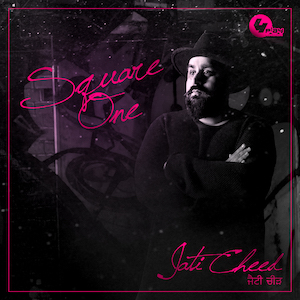 Out now is the album by Jati Cheed titled Square One featuring various artists!

After years of anticipation, Jati Cheed brings his debut album.

After numerous features on International albums, working with such producers as Bups Saggu, GV, Simon Nandrah, and Dipps Bhamrah, Jati now brings us Square One.

The album covers dance floor numbers, love songs, and ballads. Here, Jati gets to showcase his versatile vocal range and style. Jati has worked with UK producers getting that UK sound but also but has managed that International sound too.

Produced By Jati Cheed himself, Arrab Janani features one of Jati’s musical idols, Shin DCS. Jati always wanted the opportunity to work with Shin but waited for the right project. Once he heard Arrab Janani, written by London based Bindi Lolton, he knew this quirky, comical track would be so much fun with Shin. The energy is matched and the banter doesn’t end. The laughter you hear in the track is genuine laughter.

This was one the last songs to be added to the album. Going for the more international sound, Dipps and Jati go the current Punjab sound. Written by Jati, the lyrics reflect the story on young men leaving the Punjab for a better life in the UK.

From intro you can tell this is not another run of the mill track. This funky, summery track brings a smile on your face which ever weather in. Haan Chahidi written by Kashmiri Sroa, is fun, love song, with simple lyrics aimed at the UK audience.

The first release off the album, Tere Toh Vagher a rock ballad produced by GV. Jati’s vocals bring so much passion to this musical and lyrical journey. The song that turned Jati Cheed into a household name, he made the world recogonise that there is more to Jati then Dance floor numbers.

Nicknamed “Not the Players anthem”, the satirical song plays on the wannabe Ranja’s. Written by GV, this song highlights the lifestyle of the “player”, but the story end with him getting what he deserves. Great lyrics and simple beats, this will guarantee make you laugh and want to hit that repeat button.

A classic Bee2 production and energy. This dance floor number is straight up get on the dance floor fun, Written by Bee2, the track focuses on the Punjabi vibe and what Punjabi’s love to do, Dance!

DJ Dips “This DJ” bring his knowledge of how to make a dance floor number, and creates this Bhangra banger. Another track written by GV. It does exactly what is says on the tin. Track 8 Teri Yaad feat Jeeti

This “Sad” song, has a filmy sound. With lyrics from Tari Banwalipuria, the ballad sends you to movie set. You could see your favorite actors miming this one.