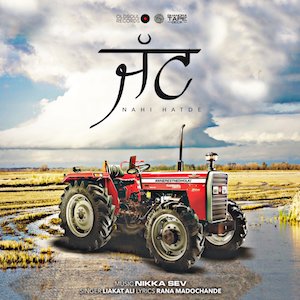 Usually, when producers want to make a name for themselves, the usual tactic is to go and collaborate with the most sought-after vocalist of the time. That way, you’re almost guaranteed to get noticed. Nikka however, has taken that strategy, and literally thrown it in the bin. Instead, like a true musician/producer, he has meticulously handpicked vocalists who fit the feel and sound of the track he has produced. This is purely based on the singer’s capability and skill, not how big a name they are. And his latest release is no different.

Back only 2 weeks after his first release of 2019, titled ‘Mela’, Nikka now brings to a song featuring a completely unknown vocalist who goes by the name of Liakat Ali. ‘Jatt Nahi Hatde’ is a Panjabi Bhangra track that builds on the foundations set by ‘Mela’ and is another release to further cement Nikka’s place in the Panjabi music industry as a producer who knows his art thoroughly.