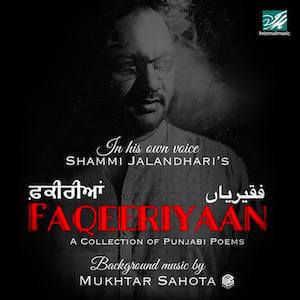 Faqeeriyaan has 9 Punjabi poems that share romantic and sufiyana themes while also shedding light on issues of drug addiction, poverty, world peace, India - Pakistan relationship and many more social issues that are globally affected today. Faqeeriyaan is a great way to promote Punjabi literature through a project of this caliber, Shammi’s poetry can be easily understood and reached by those who cannot read Gurmukhi or Shahmukhi Punjabi script. The album provides an opportunity for people to enjoy poetry in this manner, an album that is calming and brings tranquility. Shammi has contributed outstanding work to Punjabi literature and has further forthcoming musical projects with Mukhtar Sahota.