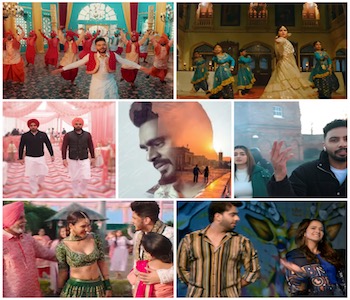 Every month we look back at the songs released in the past month so here are some of our top #Bhangra songs of February!

This happens every February and this year was no different. Many artists release songs related to Valentines and Prabh Gill is one of those artists. The master in romantic songs Prabh Gill released an EP entitled Loveholic just before Valentines. Setting a romantic feeling for all those loved ones.

These days artists are releasing songs showing a preview of their own wedding. Prem Dhillon released Dreams Unfold illustrating something similar. The video are clips of when his brother Parm Dhillon got married. The romantic lyrics have been penned by Jagjit. It is the perfect track for all those couples that are getting married and how they will protect and make each other happy.

Not just that, during the month at least three albums were released. The first being Nimrat Khaira’s Nimmo where all the tracks are mainly romantic based. The second was Vicky’s ‘Back Stage to Front Stage’ where each track is very different for each other.

And the third was Navaan Sandhu’s ‘Waymaker.’ The track Jealousy I would say was a stand out as many people can relate to the main line ‘Jealousy Zyada Ho Gayi Si, Taan Circle Chhota Kar Leya Ae.’

Film promotions continue and this time for the film ‘Main Viyah Nahi Karona Tere Naal’ with Sonam Bajwa and Gurnam Bhullar being the main actors. We have already heard a few songs which have shown a lot of love but also a bit heart-breaking. And now that the movie has released let hope it’s a great success.

Mankirt Aulakh releases the track Judge featuring the young Roopi Gill. The song which has been penned by Preeta illustrates how a girl really wants to be a Judge however falls in love with a criminal and cannot release a verdict against him.

Other song released in the month were Damaad by Miss Pooja featuring Manu Panjabi, Kabootariyan by Shivjot and Deepak Dhillon, Dil Tutteya by Jasmine Sandlas, Waja by PropheC, Solo Star by Kaur B, Friend Zone by Ranjit Bawa, Amit's Yaara Baare and many more!