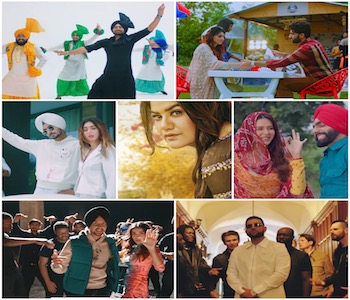 Every month we look back at the songs released in the past month so here are some of our top #Bhangra songs of July!

Who has been searching for a giddah beat track and wedding season begins? Well Kaur B’s ‘Laija Laija’ is the perfect track for the ladies. The video release has been delayed however that hasn’t stopped people making reels and videos.

Many artists are preparing themselves in releasing their albums. However, Ranjit Bawa and Karan Aujla have released their first track from their albums, ‘Loud’ and ‘Chu Gon Do’ retrospectively. But what will the rest of the album entail. Will they win their fans heart? Well we will have to wait and see...

Usually many songs talk about how a guy is trying to make the girl like him. However, Shivjot’s track ‘Jatt Mannya’ illustrates a slightly different story. She tells her mum that the one she loves has finally agreed to be hers but she just needs her mum’s permission for this relationship to move forward by giving a list of things that make him a perfect partner.

Who’s exciting to go back to the cinemas? Well one movie to watch out for would be ‘Puaada.’ The film was supposed to release earlier this year however is now releasing on 12th August 2021! Sonam Bajwa and Ammy Virk have worked in several films together which have been extremely successful. The songs to the film are gradually releasing and will get you dancing to the beat!

Other songs released in the month were ‘Umbrella’ by Diljit Dosanjh, ‘Tere Laare’ by Afsana Khan, ‘Brown Eye’ by Rajvir Jawanda, ‘Badmashi’ by Mankirt Aulakh, ‘Offensive’ by Divrose, ‘Balle Balle’ by Nirvair Pannu, ‘Jyada Jachdi’ by Jordan Sandhu and many more!