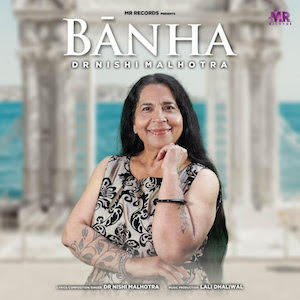 Out now is the video to Banha by Nishi Malhotra out via MR Records.

Nishi Malhotra, is the first Asian female writer, composer and singer in Europe and UK. A versatile singer with a melodious and heart piercing voice. She is highly talented all-rounder who sings geets, ghazals, filmi songs and in fact anything that will bring the audience to their feet.

She released her first album in 1988 called “Dil Dil Dil Dil” one of the songs from this album was released in the indipop compilation album, which featured Asha Bhonsle and many more artists, followed by Chadhti Jawani Dekh and has been performing worldwide since then.

She was honoured with a degree “Doctor of professional Entrepreneur with specialization in cultural music”. She is involved in several community-based activities. After the super hit Saroor and Jago we at M.R.Records are proud to announce her latest project Banha, which has been written and composed by Nishi and the music has been produced by Lali Dhaliwal.