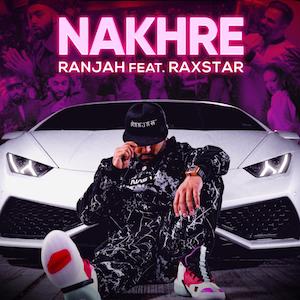 Ranjah brings you a brand new banger in the form of 'Nakhre' - bringing together his own special blend of urban vibes with a good old helping of Punjabi flavas.

With the addition of the inimitable flow of the UK's very own Raxstar, Nakhre delivers on multiple levels guaranteed to quench the insatiable thirst of music fans across the globe.

Born in Punjab and surrounded by music since childhood, Ranjah, born Mudit Arora grew up with a fundamental love for rhythm and melody. His parents, both doctors and also singers undoubtedly bolstered this fondness throughout his early years. After moving to the Northeast U.S. at a young age, his influences expanded from classical Punjabi folk and Hindi music to encompass the sounds of garage, hip-hop and R&B.

As is true with many immigrant stories, Ranjah struggled to find clarity in his identity during his early years. It was travelling back to Punjab often, and connecting through music with the local Indian community that helped reinforce his cultural roots. Heavily influenced by artists such as Rishi Rich, Apache Indian, RDB, Dr Zeus, Jazzy B, Jay-Z, Drake, and The Weeknd - Ranjah started writing lyrics in the form of raps and verses in the margins of his notebooks. Longing for a musical outlet, he performed at community events, birthday parties, and friend’s weddings.

This habit continued as he navigated a successful academic career from college to medical school, eventually becoming the youngest Doctor in his residency program. His passion for medicine earned him accolades and led him to work in hospitals across the country, ultimately driving him to help establish his family’s innovative medical practice in New Jersey, U.S.A.

Ranjah had fulfilled his mind, but it was time to fulfil his soul.

He says: "With a renewed passion in 2019, I began writing lyrics and making melodies with a purpose. I wanted to create a unique and enjoyable sound that represented the evolution of the Indian diaspora. To represent the blend of cultures and thought processes, which children of immigrants like myself, could identify with."

With multiple projects completed and more on the way, Ranjah is excited about the future...but ALWAYS focused on today! #AjjJitna

A fantastic video produced by Murshed accompanies the track.