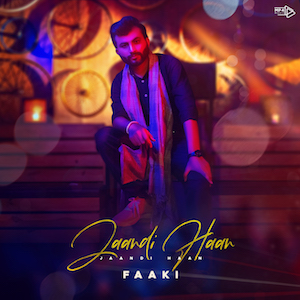 ‘Jaandi Haan’, is a sad love song of an untold true story based on Faaki, out now via The Hilltop Studios in London.

Faaki was a simple person from a village who started university in the city which was more modern and different to the way he was living. He never really fitted in with society and felt neglected. There was a girl who loved his simplicity, and at this point in time he had no idea what love was.

During the holidays, he would go back to his village and upon returning to university, he was a changed guy with a new style, look and fitted in well with the city life. The girl liked his simplicity and liked him for who he was, but he had now changed to fit in, but she never accepted his changes. It was later when she confided her feelings for Faaki to a mutual friend, who told him how she felt for him then and for who he was, but not the person he has now become.

This song has been written on behalf of the girl’s point of view and the love she had for the true him and not the new him.