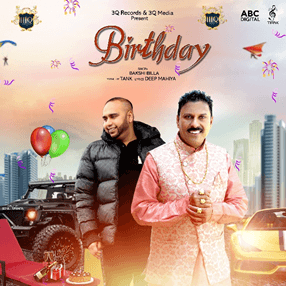 The song is written by upcoming lyricist ‘Deep Mahiya’. The video has been shot in India by ‘Sonu Sekhon’ and in the UK by ‘Bilal Sayeed Productions’.

“Tank” born and raised in Bristol has studied the art of “Digital Music” by completing a Diploma and spent most of his time working in various studios within the UK. He has been carefully crafting a distinctive sound and has had the privilege to work alongside mesmerising vocalist, musicians and lyricists. Tank released his 10-track debut album “Fully Loaded” back in 2016. The album featured an explosive line up of fresh talent and old school veterans on contemporary Asian beats. The album featured powerhouse vocalists such as The Late Karan MC, Dippa Dosanjh, Avtar Maniac, Mehi and many more.

‘Tank’ would like to announce his return to music by releasing the first of his many upcoming singles. He would also like to dedicate this track to all his fans who are celebrating their ‘Birthday’.