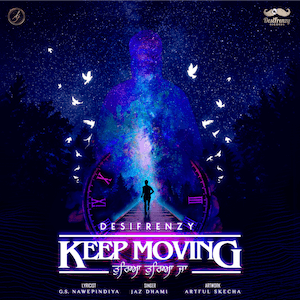 The Superstar DJ Desi Frenzy makes his debut with a song about mental health.

Desi Frenzy is a global brand we've come to recognise as the 'Remix King', with over 85 million views on youtube and countless A-Listers amongst his fans, so when he announced his debut production, audiences were expecting more of the same. But Frenzy had different ideas "I wanted to start this journey in a positive, meaningful way. This project is aimed towards raising awareness about mental health in the South Asian community."

Mental health is still a taboo subject, seen in a negative light amongst this community. This negative mindset can discourage them from talking about it and reaching out for help from their loved ones or from health services. With this song we're hoping it'll trigger a conversation amongst one another.

Frenzy has a very personal connection to the themes in the song, which has been in the making for the last 18 months "two very close family members have suffered with mental health in recent times and it’s something which has also affected me, even more so this year.”

To deliver this message he's collaborated with one of the UK's biggest desi artists, Jaz Dhami; “When Frenzy approached me with this project, I connected to the lyrics immediately; it felt like such a positive and honest message with a purpose. Really honoured to be part of it."

The song is accompanied by a short movie as Frenzy wanted to ensure it struck a chord with audiences. To do this, he got director Baljit Singh Deo on board. Baljit has executed Frenzys vision with the sensitivity the project requires (it is going to be emotional). The movie aims to explore how mental health can affect people of all ages in their day-to-day lives.

The lyrics have been beautifully written by G.S Nawepindeya and the artwork wonderfully visualised by Artful Skecha. Its an all British release!

Ultimately, the team has created a ground-breaking project to be proud of. "This collaboration is bigger than any of the names associated with it, we're hoping it'll connect with those who need it most" Jaz Dhami