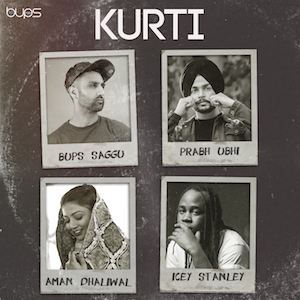 "Kurti" is Bups Saggu’s latest single and is an Afrobeat cover of the original by Mohd. Siddiq and Ranjeet Kaur.

This song was created in a beat making tutorial on Bups' Youtube channel and has been causing waves on social media. Finally this version is out and is getting a mad response from the public and amongst artists' within the Punjabi Music Industry.

The vocalists on the song include Prabh Ubhi and Aman Dhaliwal who have featured on Bups' Folk N Bass series and Icey Stanley, a well known Afrobeat and Dancehall artist, was excited to jump on as a feature which totally notches the song up to another level!

Kurti's music video has been filmed by D-Hustlerz, who are also responsible for shooting Bups' Folk-N-Bass series. This video sets the scene for a summer banger!