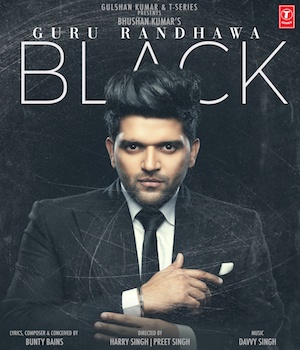 Renowned name from the Punjabi entertainment industry, Bunty Bains to show his fans his BLACK side!

Well-known lyricist and music producer of Teeje Week fame, Bunty Bains releases the first look poster of his music album BLACK - The much-talked about album is loaded with 10 songs sung by popular artistes from the Punjabi music/entertainment industry.

BLACK’s first song is sung by none other than the music sensation of the country, Guru Randhawa. Interestingly, both Bunty Bains and Guru Randhawa are coming together professionally after a gap of 6 years. Bunty Bains released Guru Randhawa’s debut song Chhad Gyi 6 years back and now, Guru is singing in Bunty’s debut music album.

All the songs in the album are written, directed and conceptualized by Bunty Bains. The album is being produced by the biggest worldwide entertainment company T-Series, Bhushan Kumar.

With the album BLACK, Bunty Bains restarts the trend long lost music albums. All the songs in this album revolve around a common theme-Darkness and betrayal.

Shares Bunty Bains, “I’ve been working on this album for almost a year now. I wanted to give the music fans across the globe something new, which is how I came up with the concept of BLACK.”

Talking about the dark theme of the album, Bunty does not mince words, “Each one of us has a bright side and a dark side. We’ve seen love, agony, resentment and betrayal, and BLACK offers all these emotions in a beautiful way.”

The 10 songs in the album will be released over the month along with the videos. Popular names from the Punjabi entertainment industry are associated with this album, and their names will be released eventually one after the other!