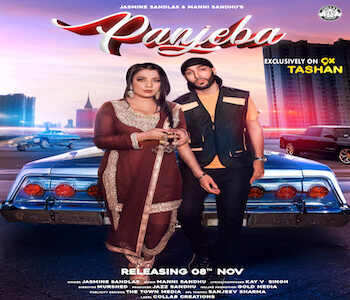 Manni Sandhu himself, has had a busy 12 months, working with the likes of Diljit Dosanjh, Akhil and successfully launching Navaan Sandhu amongst the forefront of emerging, exciting, young-talented singers coming out of Punjab.

Jasmine and Mannimet shortly after performing at the same event last year –namely, BBC Asian Network Live. Their unmistakable chemistry in the studio, coupled with their appreciation for each other’s previous work, helped churn out what many have tipped to be one of the biggest songs of the year- ‘Panjeba’.

‘Panjeba’ has a distinct UK sound with a twist of the ‘Cali-Punjab’ flavor that only Jasmine Sandlas could bring to the table. The song is penned by Kay V Singh –a talented singer and songwriter based in the States, who plays ode to the Panjeba wearing ‘Gulabi Queen’.

Musically, it is distinct from Manni Sandhu’s usual sound and has a fresh, dancehall vibe that is all set to light up dancefloors this November. The pair shared a clip of ‘Panjeba’ via social media earlier this year and following an overwhelming response, got straight to work on the music video, which was shot by London based video director, Murshed.