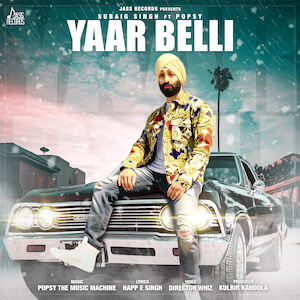 UK sensation, Subaig Singh, who is currently making his mark on the music scene, launches his brand new single, ‘’Yaar Belli’’ to a worldwide audience.

The single is releasing through Jass Records, Music is by Popsy ‪the Music Machine, Lyrics by Happ E Singh, the video made by Director Whiz and the overall project has been produced by Kulbir Kandola.

“Yaar Belli’’, is a dance floor bhangra track shot in the UK. The video, set in a casino environment, tells a story about loyalty and how your true friends are always there to cover your back and protect you against your haters.

2019 has definitely been a great year for this talented young man starting with two major releases with Bollywood music producer, Harry Anand. The latest release follows after Subaig finished filming for Taish, a Bollywood movie directed by sought after director Bejoy Nambiar, releasing worldwide in March 2020. Subaig was selected by the award-winning director to feature opposite an all-star cast, Jim Sarbh, Harshvardhan Rane, Pulkit Samrat, Sanjeeda Sheikh to name but a few.

With wedding season about to hit full swing in India, this new track is sure to be a hit with Bhangra DJs all over the country and is bound to get all Panjabi's dancing worldwide.