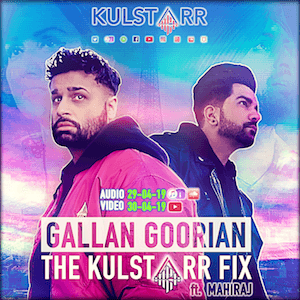 Kulstarr is back again with a new track. This time, teaming up with Punjab-based singer Mahiraj to bring you a cover of the Noor Jahan classic 'Gallan Goorian' but with a unique Kulstarr-style twist.

Kulstarr is a UK-born, up-and-coming music producer who takes particular inspiration from folk, Punjabi, hip-hop & grime genres. He has showcased his music, artwork & video making ability on YouTube with consistent releases that have helped steadily gather attention and grow an audience online for his work.

These have included remixes, complete covers with new singers, and official releases. He has also caught the eye with his video shooting & imaginative editing skills, something that he has developed over the course of releasing online. He has also recently designed & unveiled a brand new logo, which has been incorporated for the first time into his new track & video.

Recent releases such as ‘Kangani’ and ‘Sardari’ became popular amongst his listening audience across all his social media, and saw his music being playlisted on radios whilst also being very grateful for receiving interview invites across various radio stations in the UK and making an appearance on Sky TV.

Now though, Kulstarr is back again with a new track. This time, teaming up with Punjab-based singer Mahiraj. Their previous collaboration ‘Tera Mera Sajna’ , which was a mashup cover between ‘Tera Mera Pyar’ by Kumar Sanu and ‘Sajna ve Sajna’ by Gurdas Mann, became a popular track amongst Kulstarr’s fans, and now they have collaborated once again to bring you a cover of the Noor Jahan classic – Gallan Goorian – but with a unique Kulstarr-style twist. The music, artwork, and video have all been put together by Kulstarr himself.

Whist growing up and being a massive fan of Punjabi MC, the Gallan Goorian cover on the album ‘Legalized’ was one of Kulstarr’s favourite tracks growing up. So a Kulstarr version was always going to be inevitable, and he hopes to bring a different vibe & freshness to this Noor Jahan classic.

“This track for me represents living life for nothing else but chasing your dreams. Live proud & dream big.” (Kulstarr)