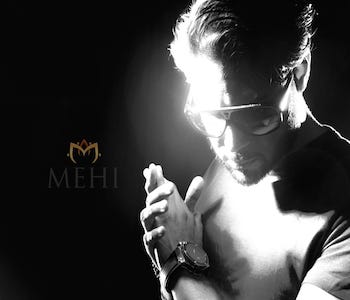 Rupinder caught up with Mehi who is no stranger to the Music scene from London to talk about his latest release and more!

Choosing an independent path, he is now working alongside G Soni with GHRU MUSIC, allowing him to reach and experiment deep into the realm of his vocal abilities, spiritual connection to sound & functions, and broaden his vision.

What have you been doing over the past few years musically?

Quality over quantity; As always, it’s been a minute.

My previous project released back in 2018 was the Single ‘Chill Kittiyaa’ which was a romantic urban song alongside a youthful music video for the younger audience. This was very much appreciated by listeners in India and the UK.

‘Dil Naiyo Lagda’ was a duet Single released in 2017 featuring a senior Artiste who goes by the name Naseebo Lal, which was also loved by listeners worldwide.

Do you think having a long gap between releases makes it harder to create a mark in the industry?

No, not exactly. I believe that if an Artiste has an all-around depth to their work and their projects it really doesn’t matter the amount of time between releases. However, the music industry has become more like a fast-food service where music is being released without careful consideration and a lack of original quality rather than investing more time and effort into perfecting one’s skills and method.

In my opinion the Music Industry is majorly lacking in creativity because of these so called “Artists” and “Superstars” who have saturated the industry with a level of mediocrity and have had no guidance and more importantly no patience to educate themselves in order to learn and understand the theory and roots of music before pursuing a career.

The majority of general audience and the average listener will not be able to appreciate an artiste who is educated and musically skilled because of their lack of knowledge in music itself as well as being poorly influenced by the individuals who are compensating for the skills they lack with investing money into flashy videos as a form of distraction for viewers and listeners.

However, there is a small minority of listeners who truly understand and respect an Artiste who has invested time, effort, and a genuine display of their passion and knowledge in their work.

Overall, both sides here are at fault. Artistes are releasing low quality of work more consistently in order to up keep their recognition. Listeners are unfortunately being altered into thinking that this generic quality of music being released is significant and has caged their mentality towards being open minded in appreciating their Art form.

Can you tell us about your new album?

‘Gift’ is an album that I have worked on for the past year, this is my first album I have lyrically written myself. The name ‘Gift’ was given to this album, as a gesture to convey my natural ability and calling to Music and the blessings I have been gifted from our Creator.

I wanted to showcase a combination of all genre’s with meaningful mainstream style songs that appeal to most range of age groups.

This album exhibits the title track ‘Gift’ which is a RnB/Trap style love song that features a talented Rapper from the states. ‘Mazaak’ is a controversial track which expresses my deep thoughts in relation to the Music today.

As an artist how do you feel about the relative death of albums and the single nature of the industry today?

Albums have slowly phased out because Artistes have become fixated on getting that ‘One Hit Wonder’ resulting in a lack of commitment to a mentally and emotionally time-consuming process which we understood was once an Album.

Having studied and gained the knowledge by senior musical professors in Punjab has allowed me to mentally grow as someone who still considers himself as a student who is still learning and developing creative ideas. When working on a project my team and I at Ghru Music follow no trends and work towards producing a quality product that expresses my emotions during a phase.

Can you tell us about GHRU Music?

Ghru Music was created with the intention of communicating my personal view point within music independently. I feel that every Artiste should have the freedom and ability to convey their genuine style, thought and work process. Ghru Music is a platform where we understand and support fresh talent to feature and collaborate with the same mindset and commitment.

We are a brand and a movement that believe in sharing our authentic love for Music with no expectations of fame, following, or money.

Social networking is the way forward to advertise and promote what you do. How much do you rely on it?

Unfortunately, as you all know, social media has its pro’s and con’s. What viewers see in terms of views or followers is often a false representation of an Artiste’s success, as this all is easily bought with money nowadays. The public are naïve and manipulated into believing the popularity of these individuals who are flourishing on social media with artificial support to feed their egos.

The media such as Radio stations and TV channels are a crucial platform for creative artistes who trust and rely on advertising and promoting their work. I can confidently say that there is favoritism within our social media platforms, and this has become somewhat of a disease that is spreading rapidly.

In 3 words describe your music?

Thank you for taking the time out for this interview. Do you have any final words for your fans?

Firstly, I’d like to Thank SimplyBhangra for allowing me to express my opinions and thoughts on such important subjects that are being avoided in regards to our Asian Music industry.

Secondly, I personally do not believe in “Fans” however I would like to also thank my listeners who have supported and shown love to my craft and my beliefs. I continue to respect everything I have learnt and commit to taking a stand in proving and supporting original music and talent for the future of our culture and music.

This is only the beginning for GHRU Music.